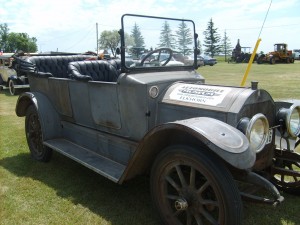 Jerome Increase Case established his company to manufacture threshing machines in Rachine, Wisconsin in 1842 where it still makes its headquarters. Sixty-nine years later in 1911 the J. I. Case Co. was to become the only major manufacturer of farm equipment to enter the automotive industry (something which auto makers Ford and General Motors both did in reverse) when they brought out “the car that never disappoints”. This fine, original unrestored Case 30 dates from only two years after the veteran company began its 16-year career in the auto trade.

The big Case touring, as one would expect from a tractor manufacturer, is constructed solidly and the Rock of Gibraltar, with heavy military-type wheels and forged axels sprung to a massive frame with a 116-inch wheelbase. The Baker quick-demountable rims and huge 34×4 tires are original on this car.

The case is powered by a 284-cubic-inch, four cylinder Continental engine a proven and advanced type of the period that produces 29 SAE horsepower: quite enough to move the big touring along at a respectable speed. Unusual among Case autos for the period, this particular car has left hand steering. As was common at the time, the engine is cast in two iron blocks bolted-up to a common cast crankcase. Ignition is by Magneto, of course. The car has a three-speed transmission and cone clutch, is an easy starter and runs just beautifully. The instrument panel, all woodwork and even the paint are completely original; while it has had no restoration work done this Case is one of the finest original cars existing.

This Case was owned by Mr. Frank Hyde of Elphinstone and has the original license plate. The J. I. Case Co. built their last car in 1927. Production never exceeded 2,000 cars a year; any Case is a rarity, especially in original condition. 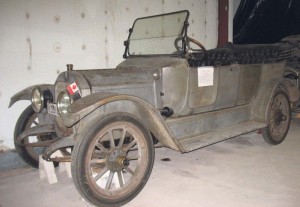 Photo from the Virden Empire Advance at:  Here