As a youngster Isaac “Ike” Clarkson marveled each time the 1909 Hupmobile owned by Mathew Black of Two Creeks passed by his home. Years later Mr. Clarkson, a farmer living near Elkhorn, Manitoba, purchased the remains of the very Hupmobile and set about restoring it. Replacing much of the old metal, wood and glass parts, re-upholstering it and repainting it the original dark green, Clarkson was in his glory. It was 1946 and the beginning of an idea. 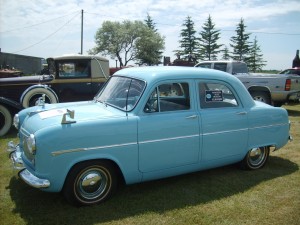 Ike undertook to preserve a part of Manitoba’s History which might have otherwise ended up in scrap metal heaps. His genuine interest in the restoration of old cars spurred him to collecting old cars and parts, primarily from within a 200 – mile radius of his home. During his lifetime he had traveled thousands of miles gathering a variety of early makes and models which eventually became Manitoba’s first antique automobile museum.

Storage did present problems. The cars were stored at the home of Marguerite Ablett whose farm Ike worked on a shared-basis. Miss Ablett supported Ike in his endeavors whenever she could. When he has accumulated some sixty cars, through purchases and donations, he offered his life’s work to the Village of Elkhorn. A non-profit organization, the Manitoba Automobile Museum Foundation was realized in 1961.

For Ike his greatest dream had come true. A museum was opened in 1967 and he continued to work on the cars until his passing in 1971 at the age of 58. After Mr. Clarkson’s death, Miss Ablett as the beneficiary turned over the entire estate to the museum. Today she is recognized as being a co-founder of the museum.

A cairn with a plaque has been raised in front of the museum to commemorate the two individuals for their dedication in preserving our heritage.